The sacred metal medallion has the image of Luang Por Pern embossed on the front side. The Thai Buddhist monk is seated cross-legged in meditation, flanked by a pair of celestial haṃsa birds (Thai: supannahong; i.e. mythical golden swans), with wings extended, holding a crystalline ball and tassle in their beak to be offered to the guru master. Above each haṃsa (sometimes also translated as ‘goose’) there is a holy ‘Na’ incantation depicted. And in the top center of the coin we can see the Yant Put Song or ‘Yantra of Five Buddhas’ (i.e. the Five Dhyani Buddhas), which comprises the sacred syllables Na Mo Put Ta Ya (i.e. Namo Buddhāya: ‘Homage to the Blessed One’). 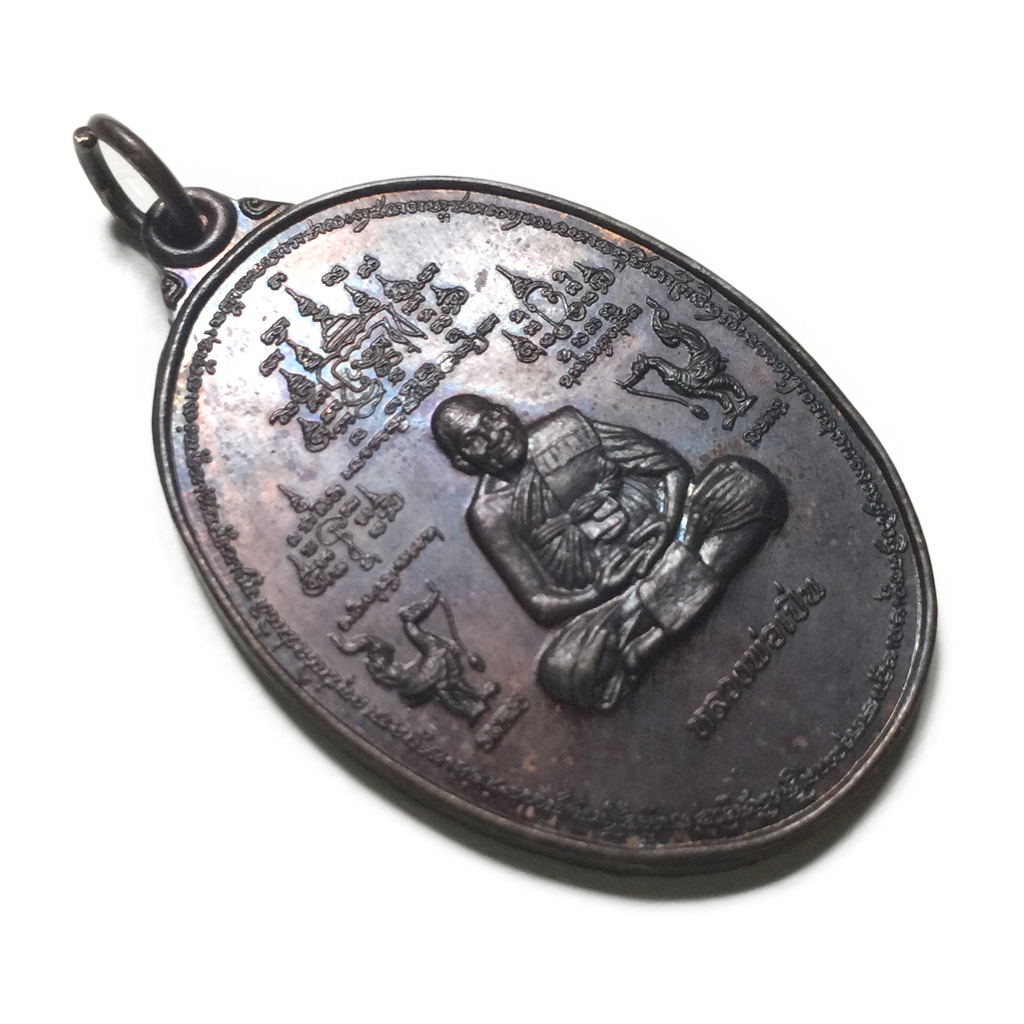 The rear side of the rian phra monk coin amulet features various traditional Hindu-Buddhist yantra designs from the sak yant tattoo pantheon of Luang Por Pern’s lineage. In the center top we can see Yant Gao Yord (‘Nine Peaks Yantra’), which represents the nine peaks of Mount Sumeru, the center of the universe in Buddhist cosmology. Another five spires are added to the left and right side of the yant, making a total of ten Buddha images. Just below the series of Buddha images there are two circular yantras; Yant Ngop Nam Oy (‘Sugar Cane Yantra’) on the left and Yant Dork Bua (‘Lotus Yantra’) on the right side, followed by two Yant Hanuman (‘Monkey God Yantra’) directly underneath the two round yantras. 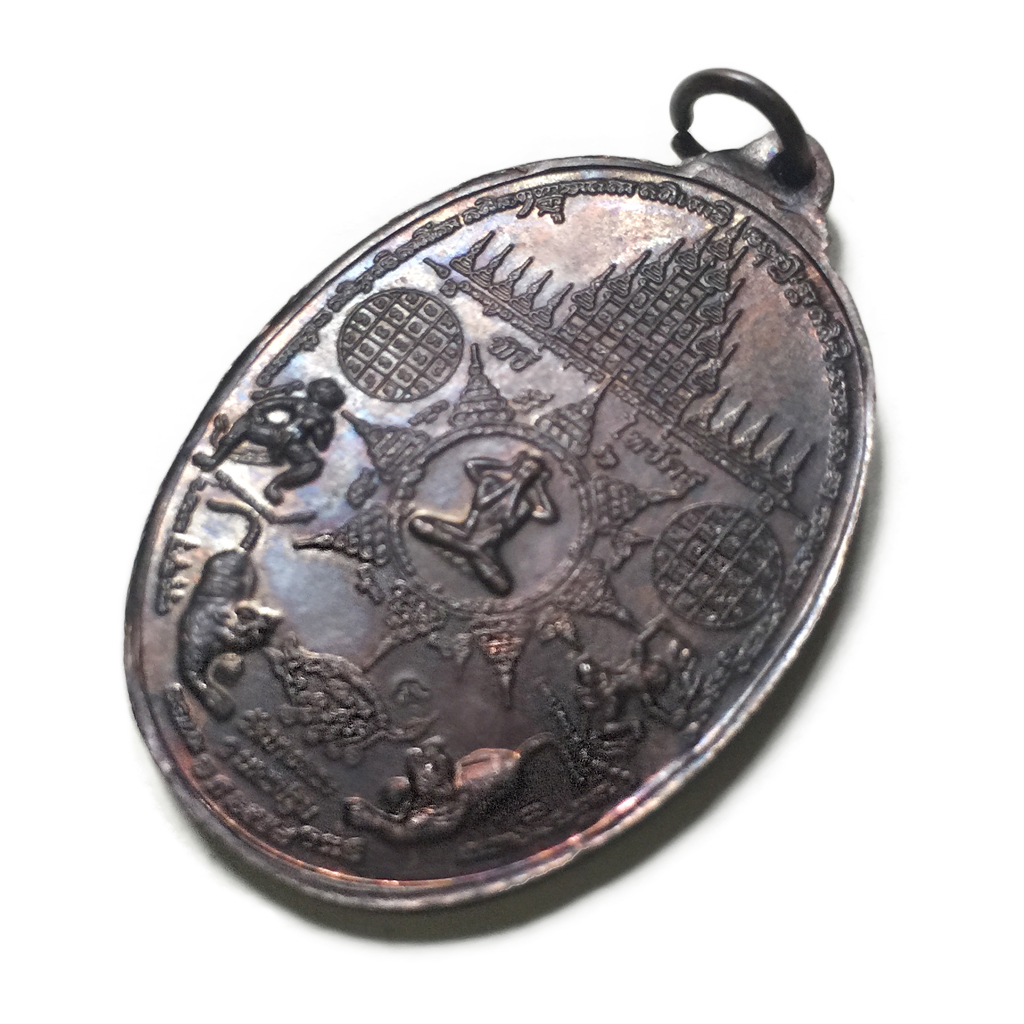 Next, the amulet has Yant Paed Tidt (‘Eight Directions Yantra’) embossed on it in the center of the rear side, offering the wearer protection in each of the eight cardinal directions. Furthermore, the image of Phra Pidta (i.e. Buddha covering his eyes) in the center of Yant Paed Tidt is believed to enhance the amulet’s magical ability to avert danger and disaster. Indeed, Phra Pidta is considered to embody the proverbial principle “see no evil, hear no evil, speak no evil”. And lastly, there is also Yant Mo Tong Daeng (‘Copper Boar Yantra’), along with two crouching tigers, to avoid risks and to prevent dangerous situations. 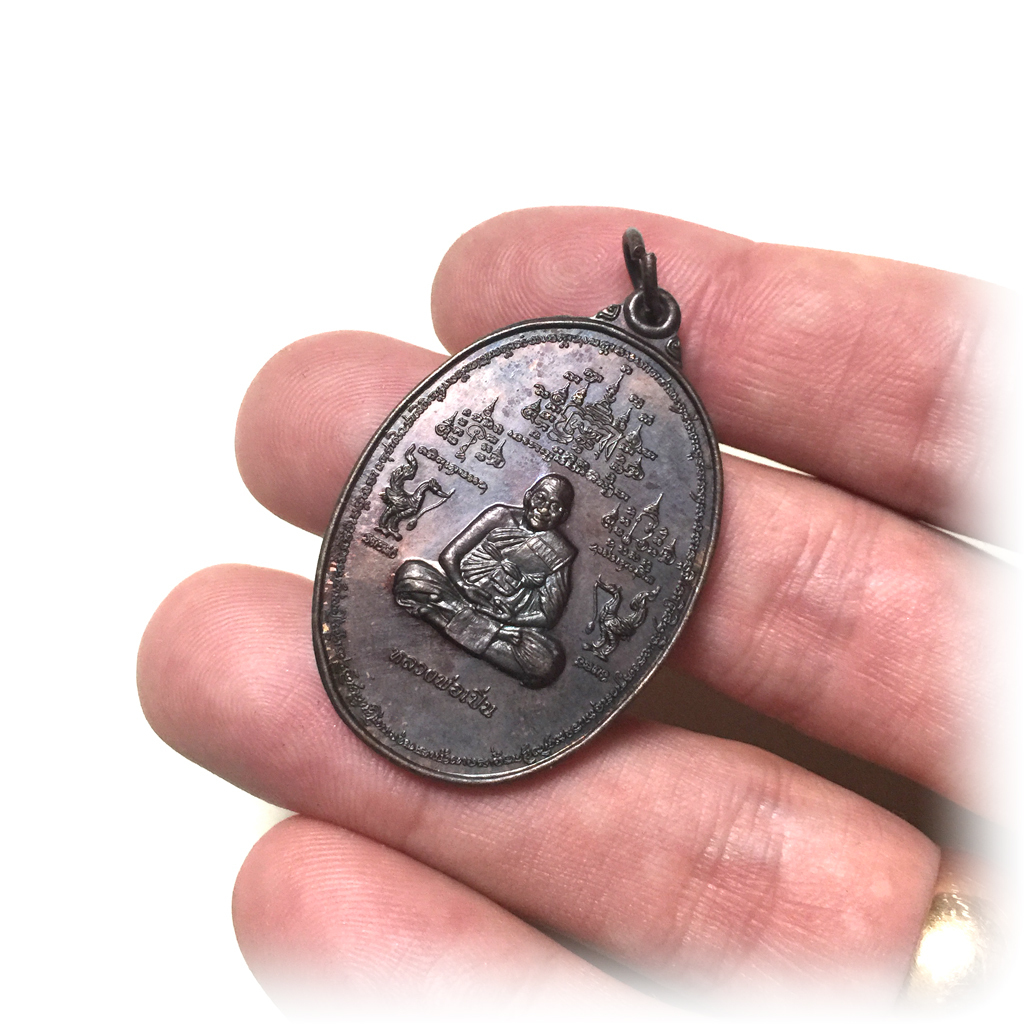