The rian phra (monk coin amulet) of the Thai Buddhist guru master Luang Por Thongdum has been empowered during a consecration ritual held at Wat Tham Tapian Thong temple on the auspicious date of May 28 in 2553 BE (2010 CE). The blessing ceremony coincided with the annual celebration of Vesak (traditional Buddhist festival that marks the birth, enlightenment, and passing away of the Buddha). 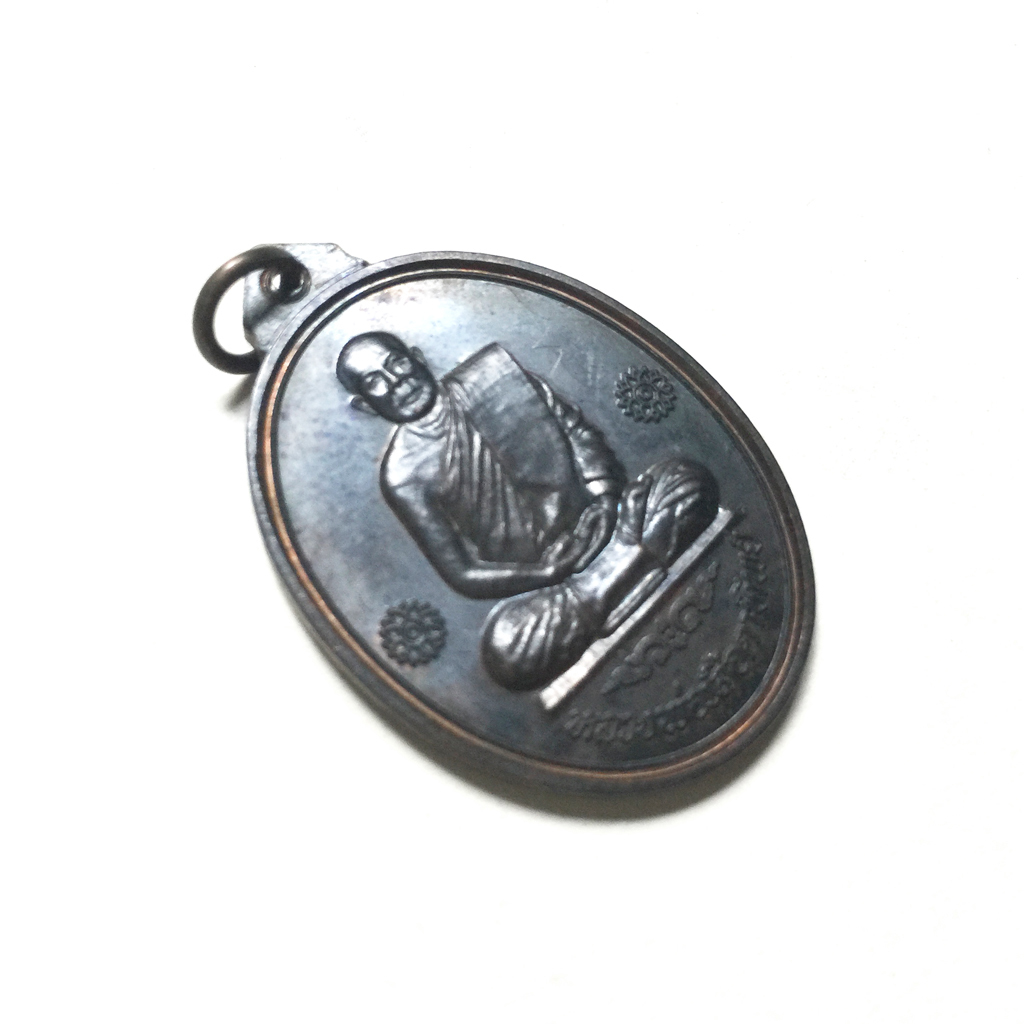 The metal pendant is made from a sacred alloy consisting of brown copper and several other alchemical substances. The same mixture was used in the mold for the large Phra Thanabodhi Setthi 9 Nah bucha statues (29 cm wide at the base) which were released in the same batch. Apart from the very life-like image of Luang Por Thongdum himself embossed on the front face, the rian also features his personal signature. In addition, this particular amulet bears the serial number 438 (out of 999), which is stamped on the rear face of the coin. Furthermore, this classic Buddhist amulet comes with its original temple box from Wat Tham Tapian Thong. 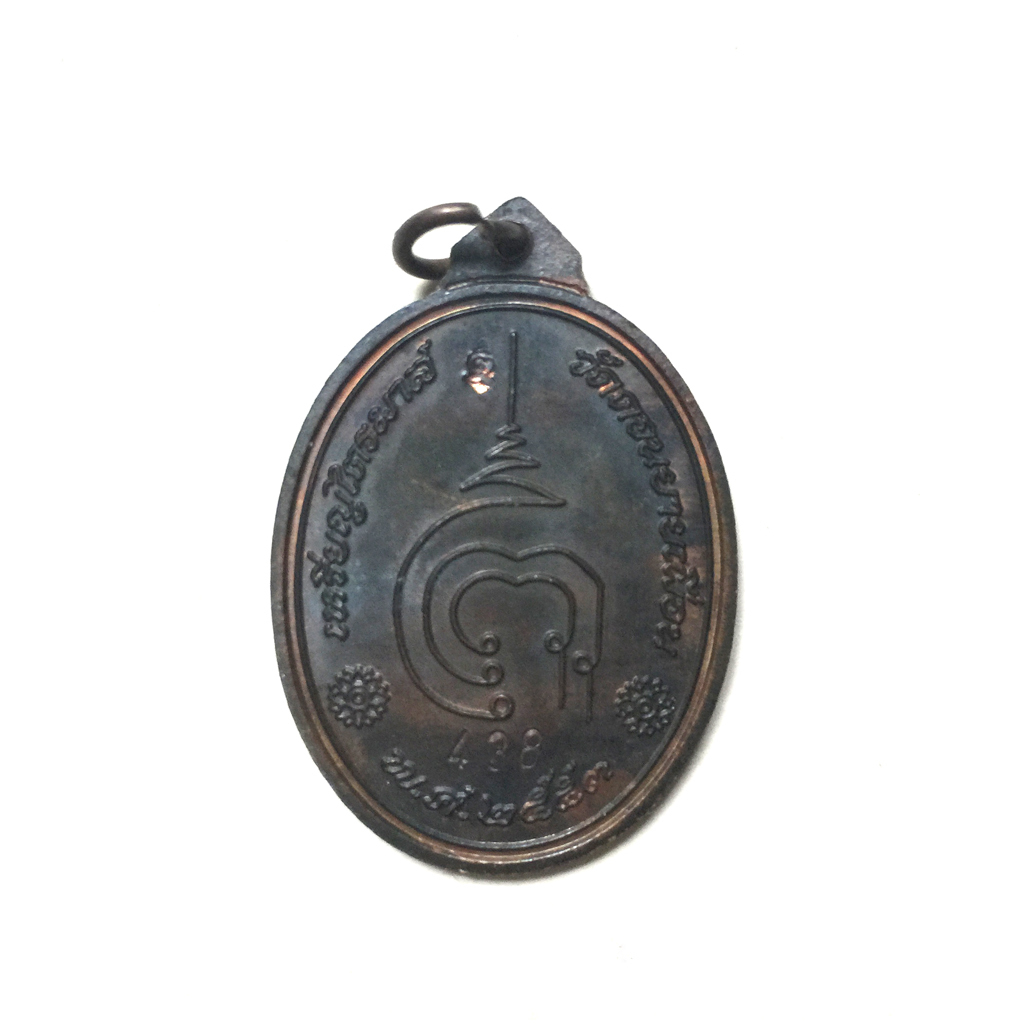 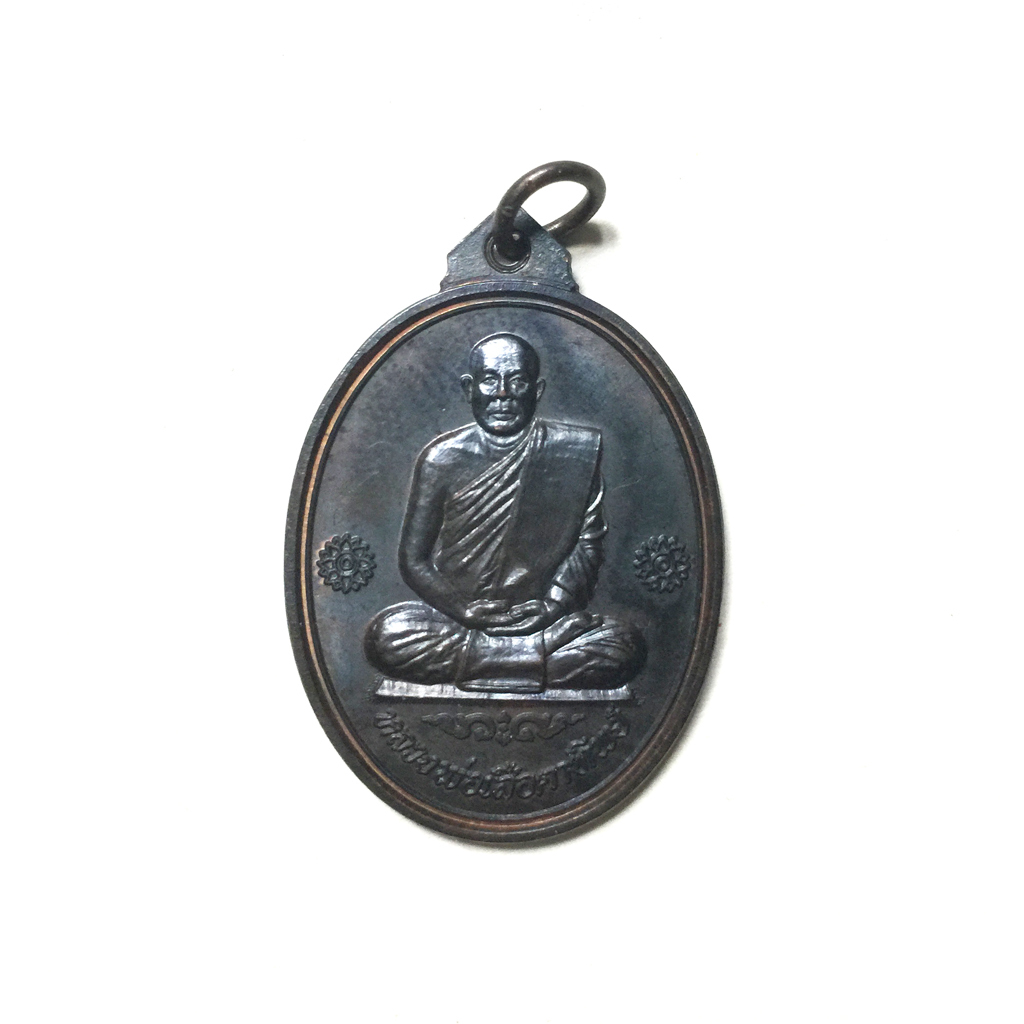 Luang Por Thongdum was born on August 19, 2477 BE (1934 CE) in the village of Prangu, Sri Saket Province, Thailand; he was the third child of his parents’ four children. When Thongdam Puiob – Luang Por’s real name – was still young he studied at Wat Ban Prasat temple until the age of ten. However, due to the fact that his family was suffering from poverty, he had to quit his studies at the temple and go back to his parents’ house to help them out by farming their land. 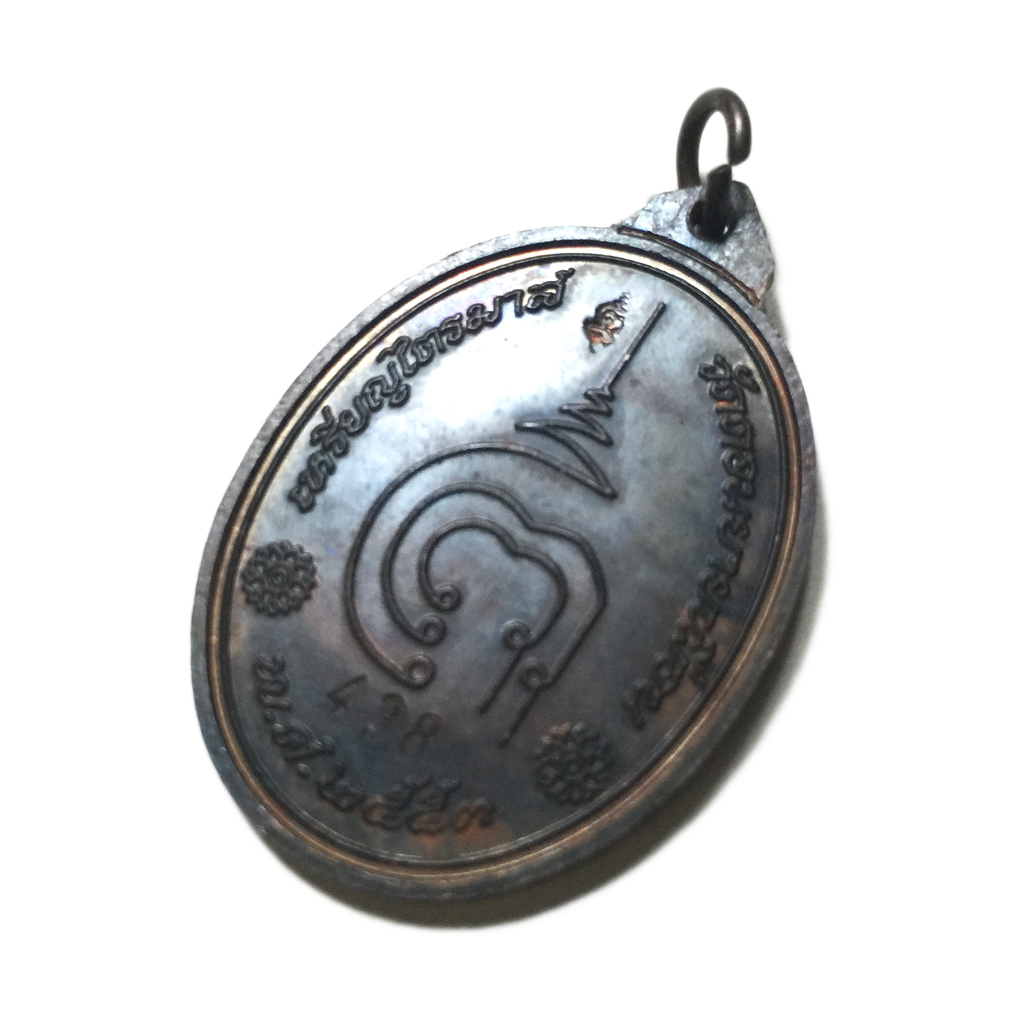 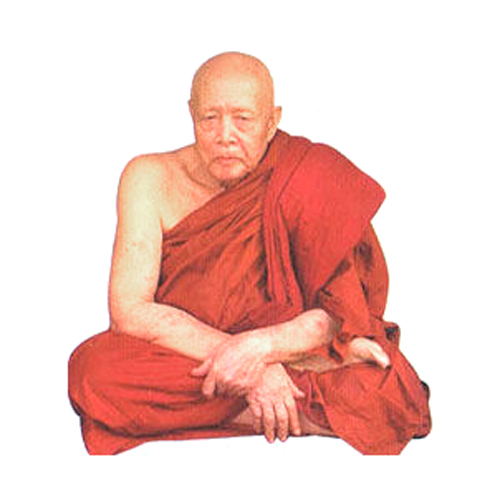 Soon after he had completed the religious and occult studies under personal guidance of his teacher Ajahn Thongsook he was  assigned as abbot of Wat Prasat Jant Ngo temple. There he spent a period of twelve years rebuilding the temple as instructed by his other master – Luang Phu Mun. After years of construction work, when the temple was fully rebuilt, Luang Por Thongdum could finally pick up his ascetic practices again, also known as tudong in Thai (Pāli: dhutanga kammathana). During one of his forest wanderings he travelled through Ubon Ratchathani Province, where he met Ajahn Hom of whom it is believed that he had attained a very high level in meditation practice. Therefore, Luang Por Thongdum decided to take a short break from his intense ascetic practice in order to practice meditation together with the Venerable Ajahn Hom. Yet at the same time Luang Por Thongdum also continued to develop his occult practices (Thai: saiyasart). 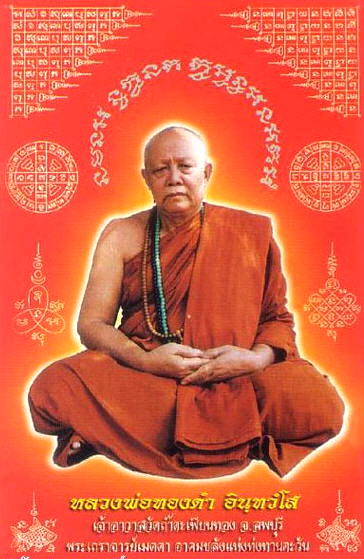 Upon completion of his studies under Ajahn Hom he was given an old Thai Buddhist scripture called ‘Phra Dhamma Gaow Goti’. After he received his master’s blessing, he then departed to pick up his tudong practice again. Then, in 2512 BE (1969 CE), the wandering forest monk arrived at the cave temple of Than Phra Narai Khao Wong in Lopburi. Whilst he was staying there he was invited by Nang Pisamai to very quiet place but rather eerie place. Despite local rumors suggesting this place was haunted by evil spirits, Luang Por Thongdum found a hidden cave nearby and decided to reside there. This place would later become known as Wat Tham Tapian Thong. 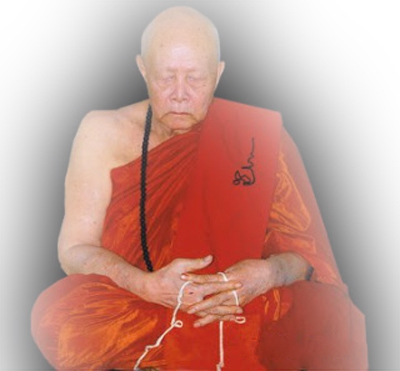 After the cave was turned into a small temple, local villagers started to come to Wat Tham Tapian Thong to receive sak yant tattoos from the abbot (Luang Por Thongdum). Within a relatively short period of time the abbot’s yantra tattoos became known for their magical power. Unfortunately it happened that some of the devotees used the magic quality of their sak yant to commit various crimes. Thus the local government and police ordered the abbot to quit making sak yant. 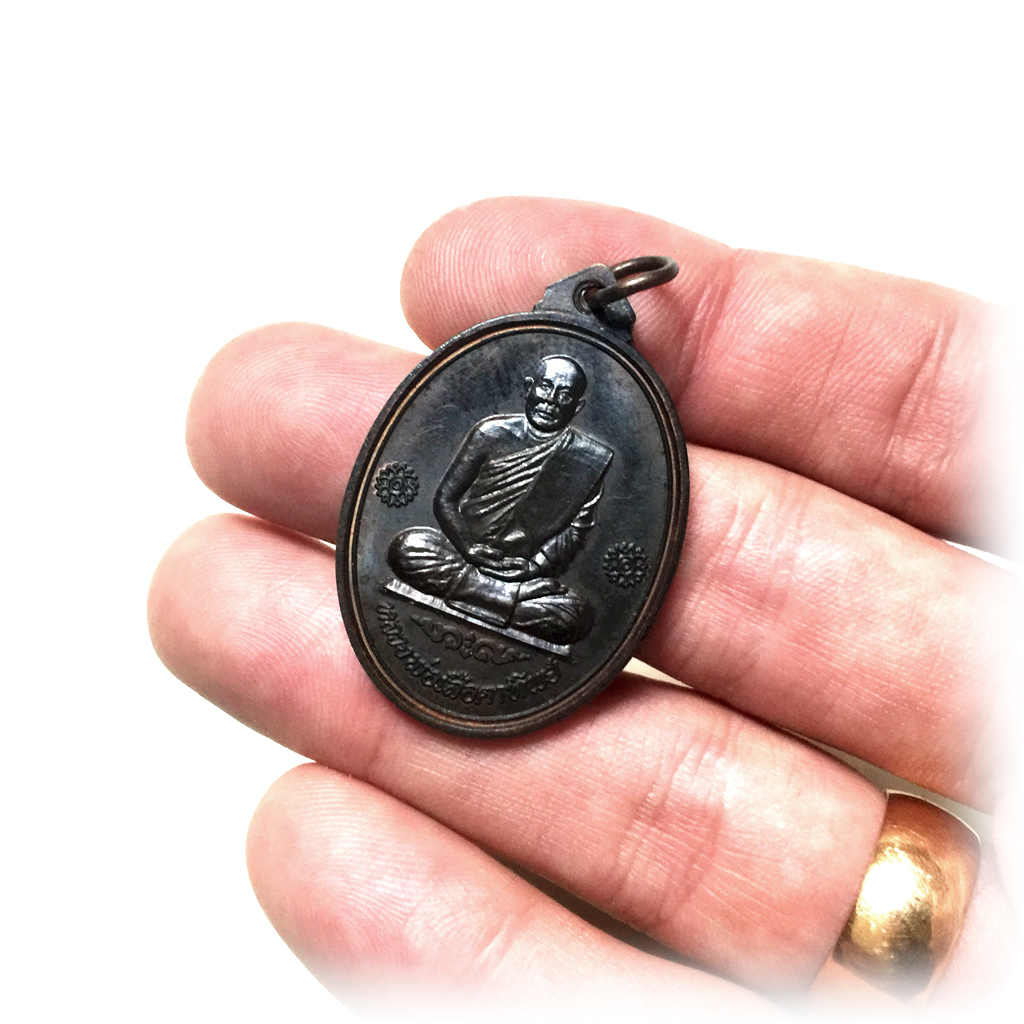 Later, in the years from 2520 to 2524 BE (1977-81 CE), Luang Por Thongdum got frequently invited to Bangkok to join ceremonial blessing rituals. On these grand occasions he met many other well known monks, such as Luang Por Toh of Wat Praduchimplee; Luang Por Eia of Wat Bandan; Luang Por Kammi of Wat Tham Kuha Sawan; Luang Por Tit of Wat Palelai; Luang Phu Sud of Wat Kalong; and Luang Por Pring of Wat Bod Gong Tanu. Thus he took the opportunity to study various wicha from these great masters as well. Since 2525 BE (1982 CE) Luang Por Thongdum resides at Wat Tham Tapian Thong, and began to make amulets.